The Quay Brothers are artists who continue to control their images and time in the age of computer-generated images. After two years of close discussion with the Quay Brothers, the JEONJU International Film Festival has organized a special focus to honor the twins’ world of art and craftsmanship. The Quay Brothers first became globally known thanks to their animation The Street of Crocodiles (1986), which was invited to the Cannes Film Festival. 40 years later, they continue to create 24 movements for each second with their puppet animation.
Influenced by surrealism, German expressionism, and Eastern European literature, Quay Brothers’ works may seem illogical, dark, strange and horrific at first, but their artistic ambition is to give the audience the experience of breaking all customs. Creativity that breaks prejudices and condensed symbolisms are concepts the Quays express through the visual distortions and non-conventional camerawork in their films. In addition, they select and write their music, shoot, and even edit. Their production process is against the given institutional practices in the film industry, but identical twins Quay Brothers are not tied down by any conventions. They’re interested in the trivial and insignificant. Instead of being absorbed into the system, they rely on each other and have created their own unique world.
This special focus consists of a mix of their experimental work including puppet animation, live motion, and graphic projects. Commercial advertisements, documentaries, music videos, broadcast shows, and operas which are media readily around us, have gone through the hands of the Quay Brothers to transform into their own unique style. A diverse range of their works will be introduced. The Cabinet of Jan Švankmajer shows their respect for the Czech surrealist animation director Jan Švankmajer and also their affection for Giuseppe ARCIMBOLDO. The Comb is based on an original by Robert WALSER, The Street of Crocodiles is the cinematic version of Bruno SCHUL’s short story with the same title, Maska (2010) is based on the novel by Stanisław LEM, and their latest film A Doll’s Breath (2019) is based on the novel by Uruguay writer Felisberto HERNANDEZ. These are some of the 25 titles from Quay Brothers, who were inspired by many other artists, that will screen at the festival. In addition, documentary Quay by Christopher NOLAN, who is famous for being a fan of the Quay Brothers’, will give us a sneak peek at the twins’ secret workshop.
Quay Brothers’ diverse works which had limited exposure in Korea will be screened as a part of the special focus, while an exhibition of their artworks will run at the same time to reexamine the unique world of the twins. Special exhibition “Quay Brothers: Welcome to the ≫Dormitorium≪” which will be held at the Factory of Contemporary Arts in Palbok, will showcase the Quay Brothers’ The Black Drawings, installation work, as well as 100 of their dormitoriums, which are delicate decor boxes used for their films’ mise-en-scène. Experiencing the works of the Quay Brothers will surely marvel the audience.

One of elements presented throughout the works of the Quay Brothers is the fantasy literature. This program introduces Brother Quay's short films that are heavily influenced by the following artists: Bruno SHULZ, a novelist who got murdered after publishing two collections of short stories; Alice, the character from Lewis CARROLL's novel; Jan POTOCKI, a Polish nobleman and linguist who committed suicide; and Felisberto HERNÁNDEZ, a writer from Uruguay who is considered the father of Magic realism. 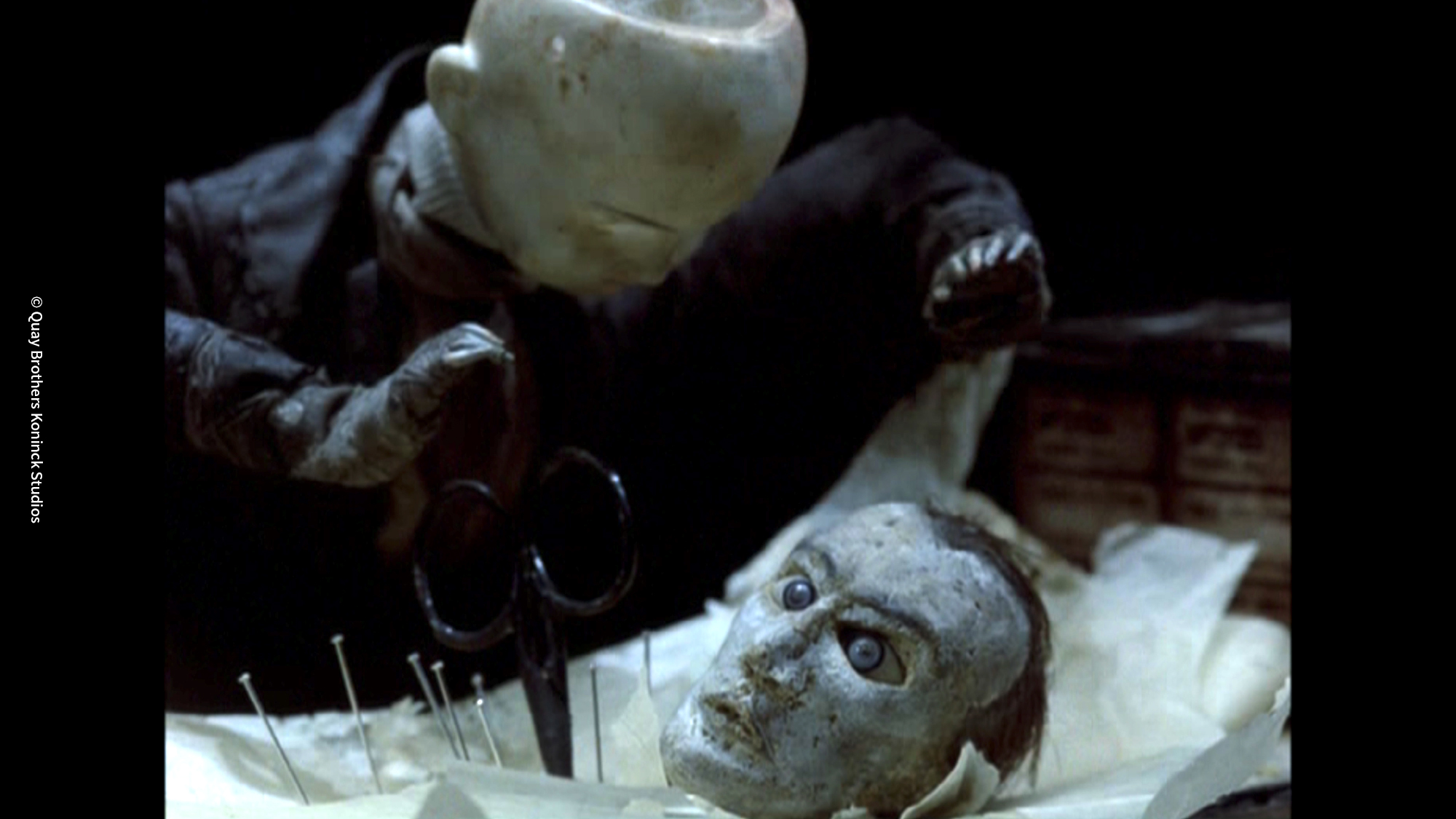 The Quays’ masterpiece, Street of Crocodiles is adapted from a short story by Polish writer Bruno SCHULZ, and was their first film shot on 35mm. A museum keeper spits into the eyepiece of an ancient peep-show and sets the musty machine in motion, plunging the viewer into a nightmarish netherworld of bizarre puppet rituals among the dirt and grime.
DirectorQuay Brothers
UK 1986 22min Blu-ray color/b&w shorts Animation 12 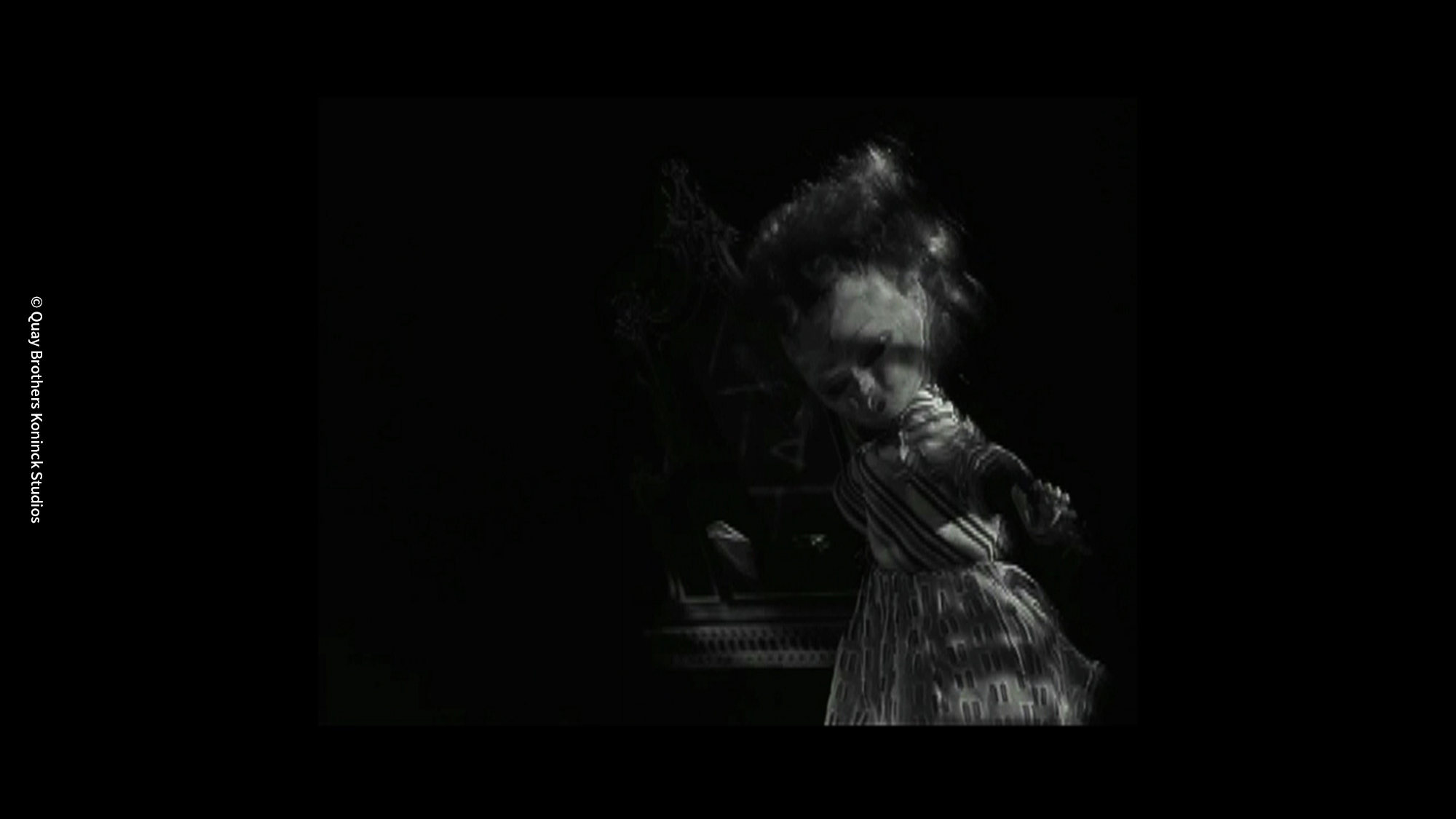 Alice in Not So Wonderland

Alice is playing hopscotch alone. Suddenly a strange and terrifying energy descends from the sky and settles on the house. Alice screams for help in fear to no avail. This film was created at the suggestion of Save Our Selves (SOS), a group of activists organized to raise awareness of global climate change.
DirectorQuay Brothers
UK 2007 3min Blu-ray color/b&w shorts Animation G 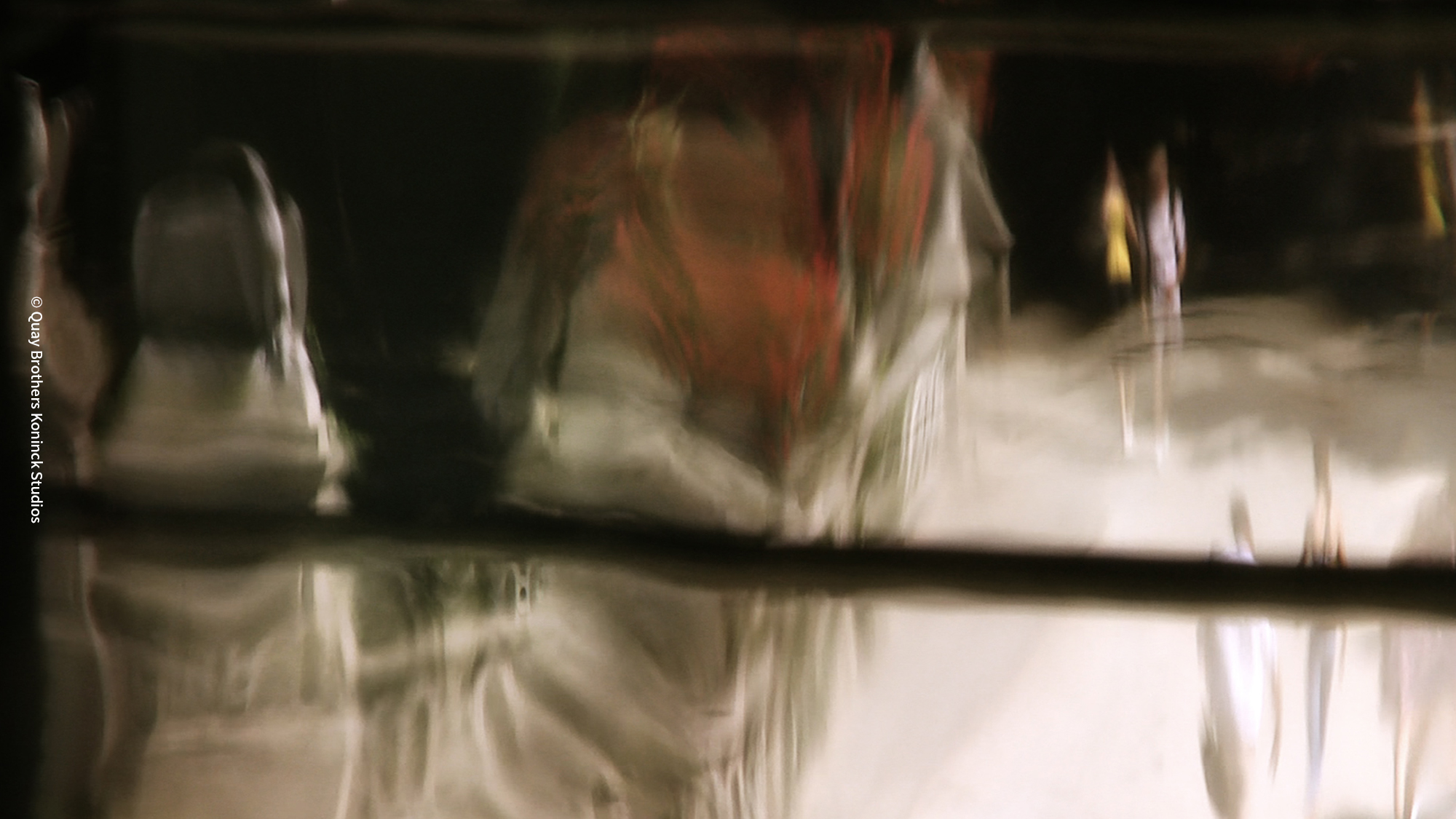 In the Renaissance castle of the Polish count - Jan POTOCKI - in Lancut, the modern traces of a past glory persevere and become visible again at the tones of Krzysztof PENDERECKI’s music and Brothers Quay´s imaginary animation.
DirectorQuay Brothers
Poland 2009 23min Blu-ray color shorts Animation G 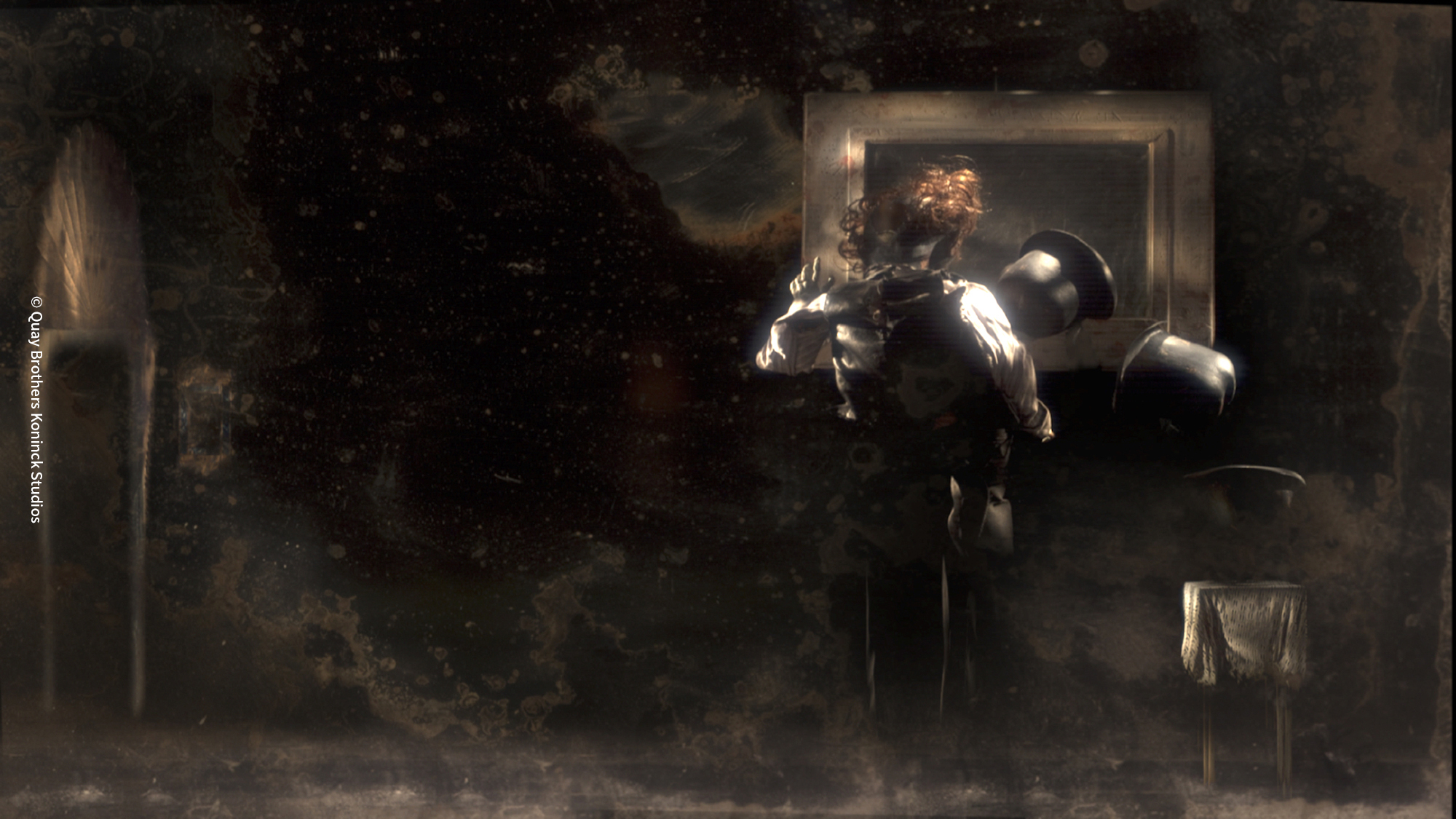 A Quay Brothers tribute to the work of the “Father of Magical realism,” Uruguayan writer Felisberto HERNÁNDEZ, inspired by fragments and motifs from his short stories “The Balcony” and “The Flooded House.”
DirectorQuay Brothers
UK, USA 2013 28min Blu-ray color shorts Animation G

Music plays a vital role in the Quay Brothers' works. Sometimes they make films inspired by certain music or use music as a script. This program primarily deals with their films where the music becomes the protagonist. Though each film of Stille Nacht series was created by different requests and intents, they share a common format; they are music videos. In The Sandman, Quay Brothers turned the German Romantic author E. T. A. Hoffmann's story into a dance film. Eurydice: She, So Beloved was created to celebrate L'Orfeo composed by the pioneer of modern opera, Claudio MONTEVERDI. 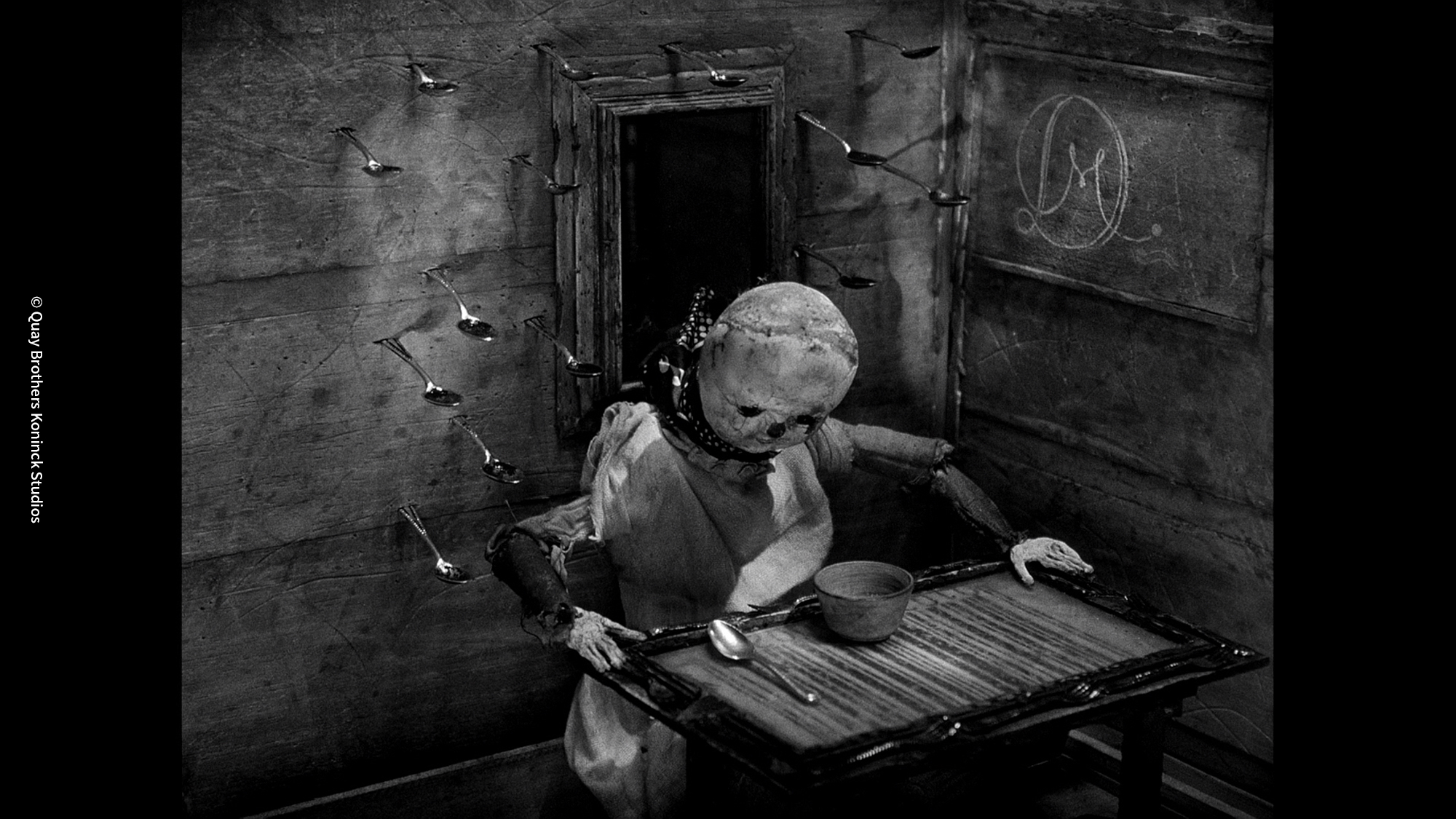 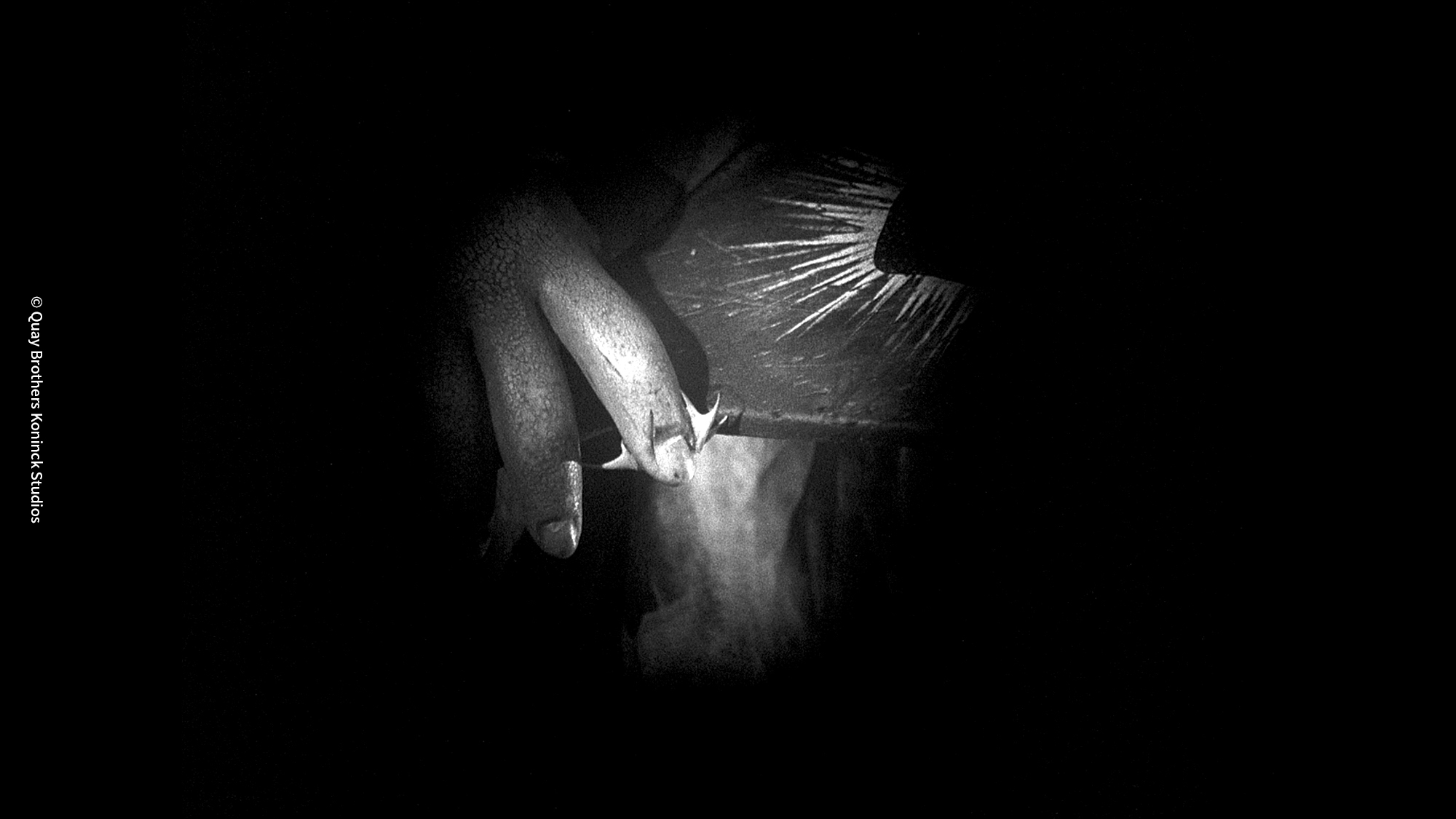 A three-minute animated choreography with an ethereal pop soundtrack by the remarkable band called "His Name Is Alive." With a typically eccentric cast of a ragged doll, a white rabbit and a manic ping-pong ball, the Quays construct a hypnotic, beguiling, and vaguely menacing ballet—something like a music video made by Max ERNST. In beautifully textured black & white, Are We Still Married? is a small work, but it is as accomplished and unforgettable as their very best.
DirectorQuay Brothers
UK 1992 4min Blu-ray b&w shorts Animation 15 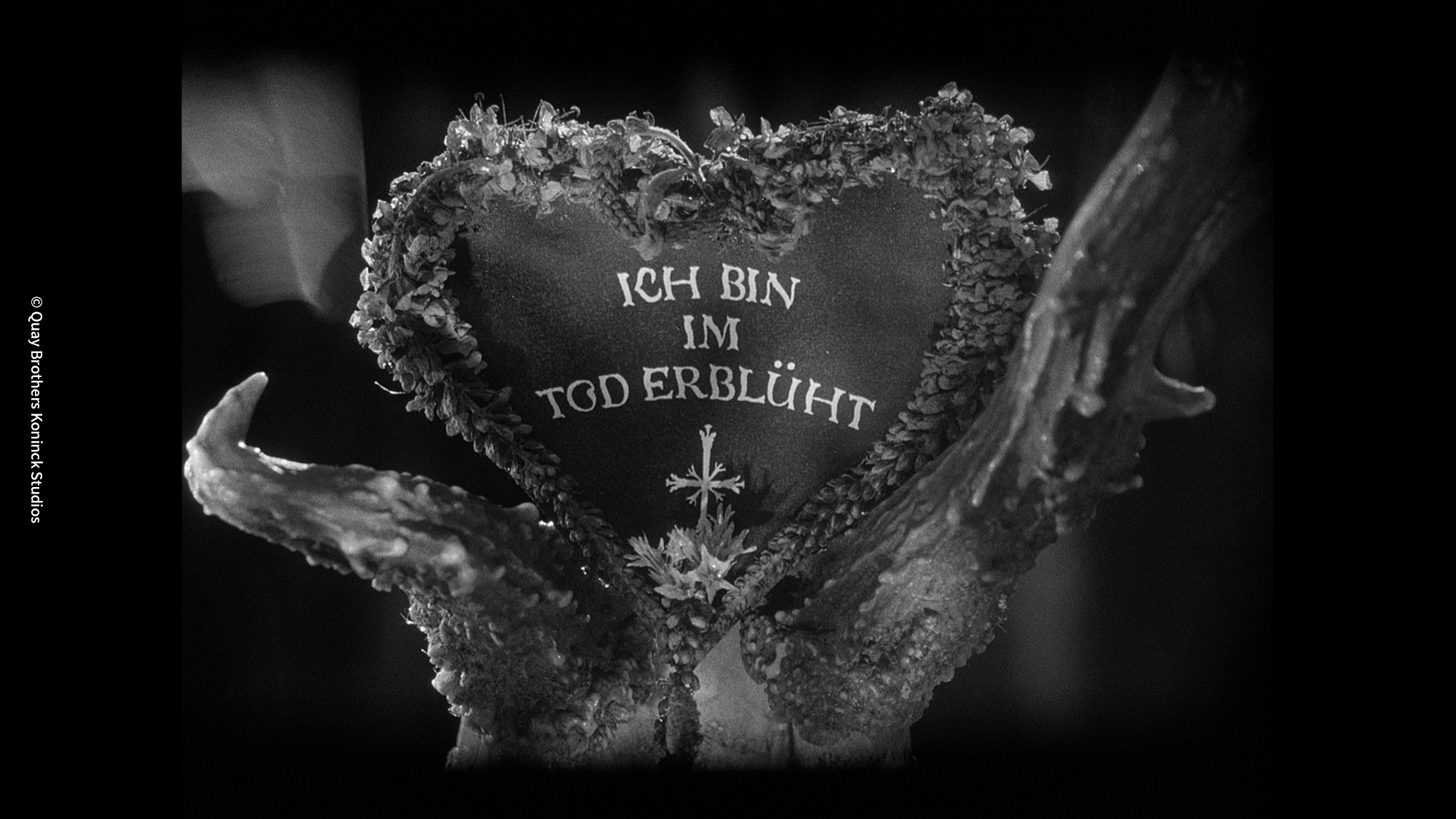 The third film of the Stille Nacht series is an excursion into the dark, dream-like forests of the Quays´ imagination which features imagery later used in the feature Institute Benjamenta, or This Dream People Call Human Life (1995).
DirectorQuay Brothers
UK 1993 5min Blu-ray color shorts Animation G 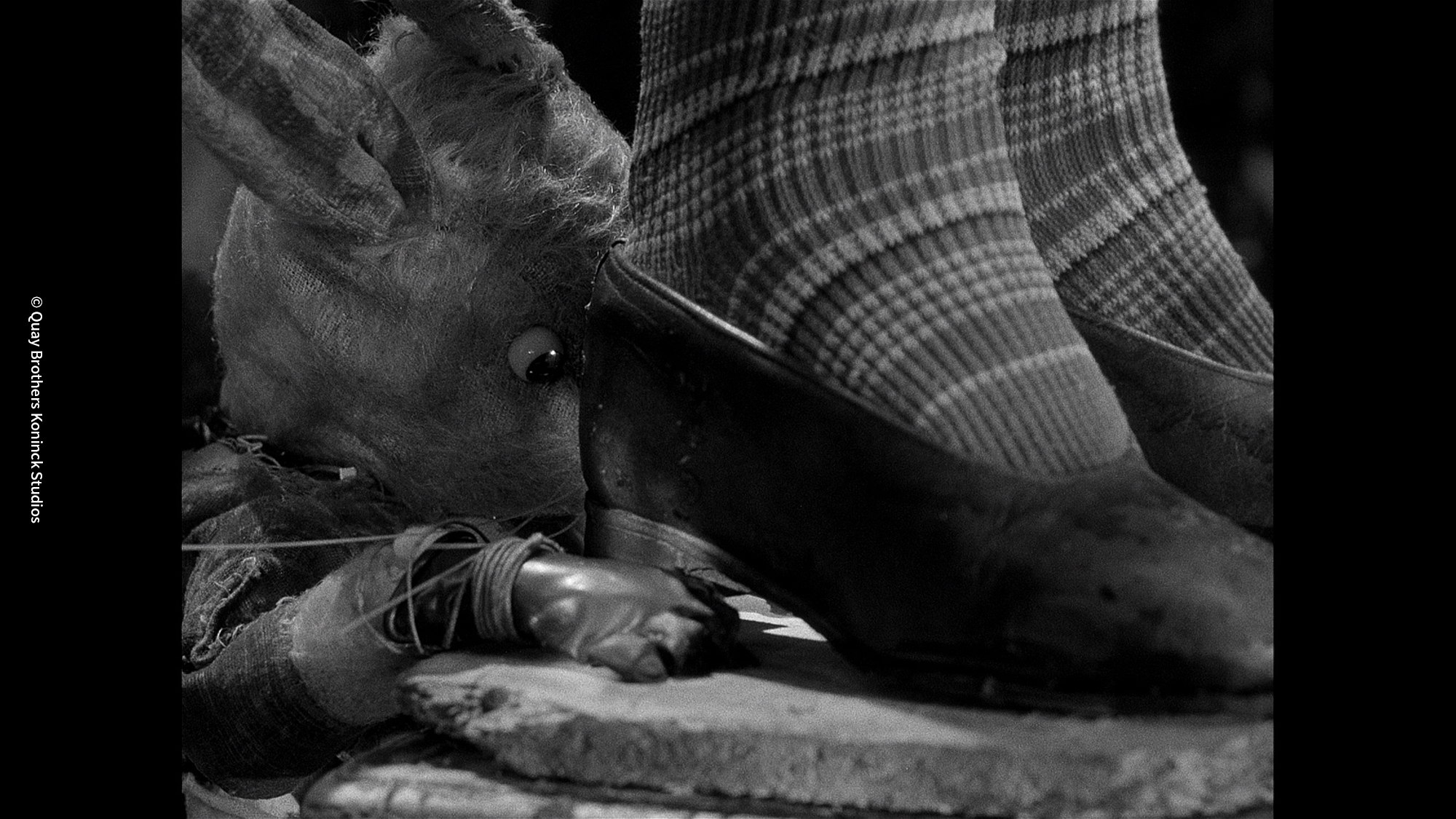 As a young girl stands on the cusp of adulthood, a rabbit and a demonic figure are locked in a power struggle.
DirectorQuay Brothers
UK 1995 4min Blu-ray b&w shorts Animation G 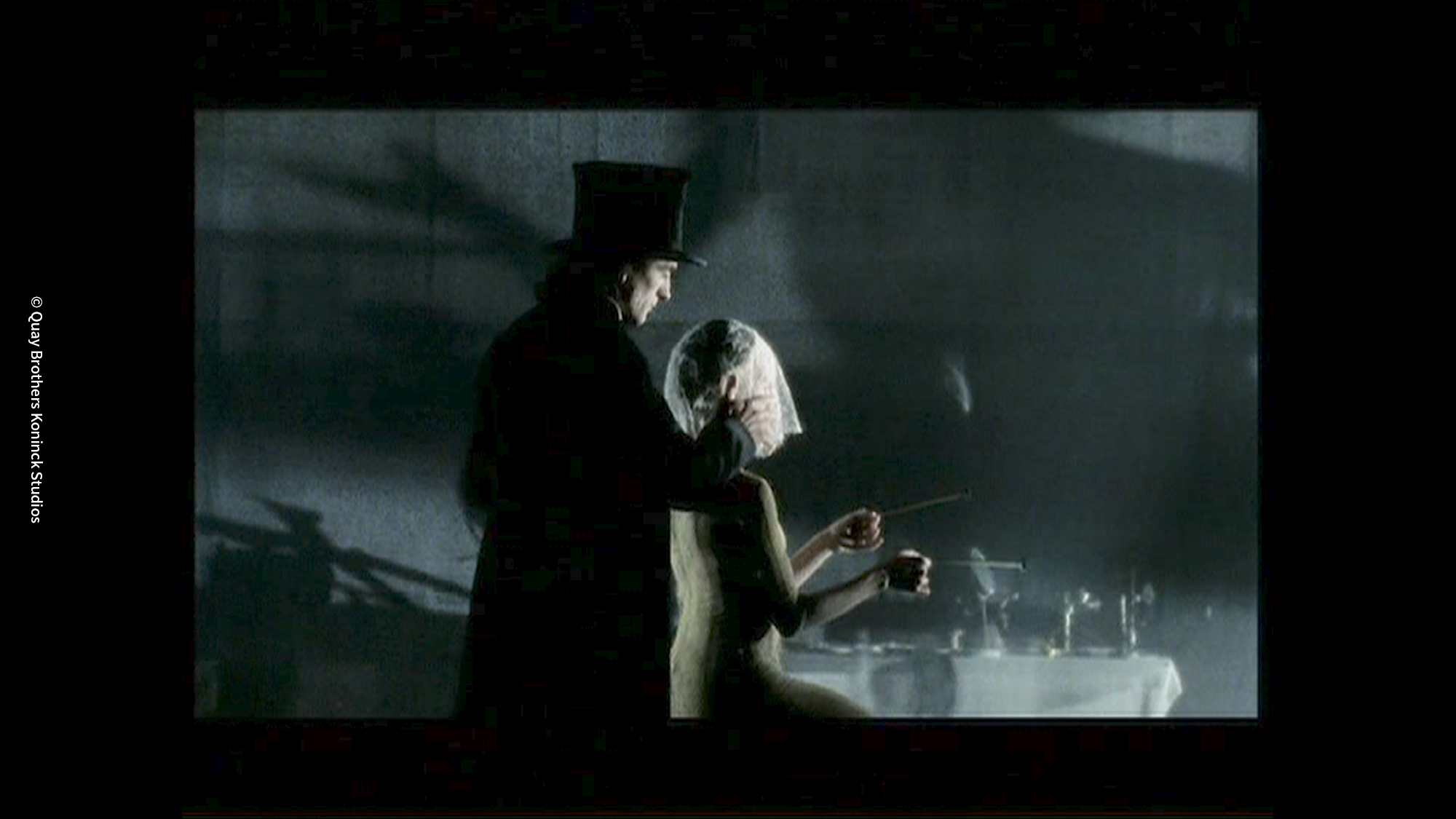 The dying E.T.A. HOFFMANN is cared for by his dedicated nurse and doctor. Then a demonic character looms up from one of his own tales to finish the story. With music by György KURTÁG and Leoš JANÁ ČEK.
DirectorQuay Brothers, Will TUCKETT
UK 2000 42min Blu-ray color feature Musical 12
Jeonju Office