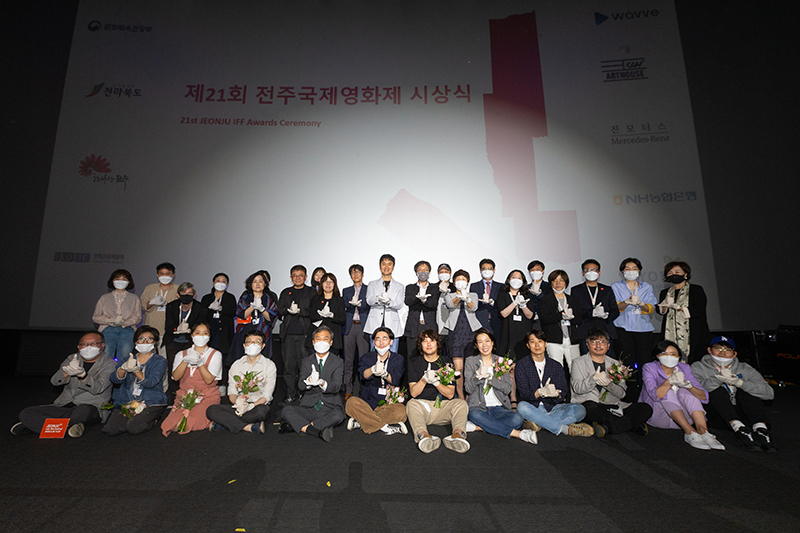 ▲ Awards ceremony of the JEONJU IFF

At 6 PM on June 1, the 21st JEONJU International Film Festival (JEONJU IFF, Festival Director LEE Joondong) held an awards ceremony at CGV Jeonjugosa 1 where the winners in each category were announced.

Firstly in International Competition, director GAO Ming was honored with the Grand Prize for Damp Season. The film is the director’s first narrative feature and his second feature following his documentary, Pai Gu (2006). GAO has been working as a scriptwriter, director, and designer in China. Damp Season is about the frustrating and suffocating humidity-like relationships four young men and women who live in Shenzen, a city in Southern China. The jury members of the International Competition said, “The attempt to capture the problems of the young Chinese generation on the screen stood out.” They added, “The 8 titles in International Competition addressed globalization, the human suffering caused by neoliberalism, the youth who are lost as the traditional family disintegrates, and the existence of a mother figure who contain and support the children living in social oppression and conventions. These subject matters are not completely irrelevant to the current COVID-19 pandemic, and they were told in new perspectives through innovative ways. Among them all, we chose a film that coincided with the identity of JEONJU IFF that also dug deep into the theme the director chose.”

Director GAO Ming who received the news of the award prior to the awards ceremony sent a video message and said, “While the world world is still under the shadow of epidemic, a bright light of the film makes us feel warmth and strength. I hope theaters will reopen soon so that we’ll be able to enjoy movies on the big screen again” while sending his thanks to JEONJU IFF and the jury members.

As for International Competition’s Best Picture Prize (sponsored by NH NongHyup), Argentinian director Clarisa NAVAS’ One in a Thousand was awarded. Luis López CARRASCO’s The Year of the Discovery won the Special Jury Prize, while two actors from Adam by Maryam TOUZANI, Lubna AZABAL and Nisrin ERRADI, received the Special Mention.

In Korean Competition where 125 films were submitted and 11 were selected as the finalists, KIM Mijo´s Gull and SHIN Dongmin´s Mom’s Song jointly won the Grand Prize (waave Award). Gull follows Obok, a middle-aged woman who works at a market and was sexually assaulted by Gitaek, a fellow vendor and chairman of the Redevelopment Committee. She fights a lonely fight to obtain her rights and protect her dignity. Mom’s Song is told from the perspective of the son as he studies his divorced mother’s daily life. It’s director SHIN Dongmin’s autobiographical story that reflects on the meaning of family.

The Best Acting Prize which was newly introduced last year was awarded to YEOM Hyeran of director BAE Jongdae’s Black Light and OH Jungse of director LEE Taegyeom’s Dispatch; I Don’t Fire Myself.

Jury members of the Korean Competition said, “This year´s competition titles showed a wide spectrum of themes and subject matter, and many films had strong tendencies to focus on individual choices made in dark times. In particular, we noticed many films had unique female-led narratives that broke the limits of women characters many actresses played previously. In addition, we want to encourage and send our support to the directors who decided to proceed with the unprecedented screenings at our festival without any audience.”

In addition, LIM Seunghyeun’s Homeless was honored with the CGV Art House Award.

This year, the Korean Competition for Shorts section received a record number of submissions of 1,040 titles. Out of the 25 finalists, HAN Byunga’s animation The End of the Universe won the Grand Prize (wavve Award). The End of the Universe follows the path of a terminally ill woman heading home, and it encompasses rich messages about life and death within its simple composition. In addition, BANG Sungjun’s Walking Backwards won the Best Director Prize (Sponsored by Kyobo Life Insurance), KANG Jeongin’s Each and YOO Joonmin’s Expiration Date won the Special Jury Prize, and CHO Minjae and LEE Nayeon The Thread won the Special Mention.

The jury members of the Korean Competition for Shorts said, “This year, 25 Korean Competition for Shorts titles discussed various subject matter about different classes and generations. They did not look at the society in a two-dimensional way, but we could see they tried to understand the society in multiple layers.” They added, “We hope all of the filmmakers who made these 25 films will continue to make more films without letting COVID-19 or anything else get in their ways.”

In non-competition, the NETPAC Award, awarded by Network for the Promotion of Asian Cinema, selected one Asian film. This year, Pushpendra SINGH’s The Shepherdess and the Seven Songs received the honor, while the Documentary Award (Sponsored by Jin Motors) which selects a documentary film from Korean Cinema and Korean Competition was awarded to Emmanuel Moonchil PARK’s Comfort, a vivid record of the harsh life of KIM Soonak who was forced to live as a “comfort woman” by the Japanese Imperial Army.

Meanwhile, the JEONJU IFF will hold the JEONJU Project Market Award Ceremony at 6 PM on June 2, where the JEONJU Cinema Project 2021 titles will be announced and awarded. In addition, the extended screenings which were scheduled to start on June 9 have been postponed until further notice due to the recent outbreak of COVID-19. Once the condition stabilizes, the festival will plan and announce the new schedule along with the #thanks_challenge screening for medical staff and essential workers in the Jeonju region.